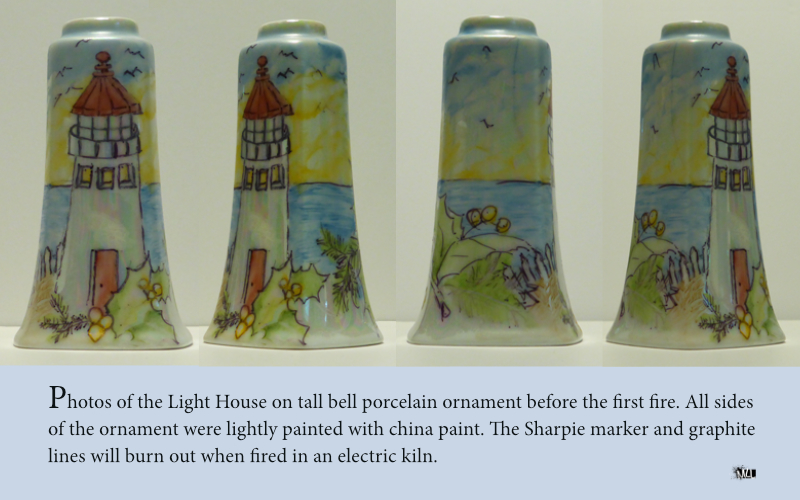 Lighthouse in winter. — Painting Instructions Below

Remove the metal hanger from the ornament. Spray denatured alcohol or glass cleaner onto the ornament and wipe it off with a clean lint free cloth. Old cotton sheets, cotton t-shirts and industrial strength blue paper towels are all good lint free choices for cleaning porcelain.

Scroll down to the bottom of this article to locate the pen and ink drawing that you can use to transfer the lighthouse drawing onto tracing paper.

Next, place a piece of graphite paper with the graphite side face down on the porcelain ornament. The graphite paper should be sandwiched in between the tracing paper and the porcelain ornament. Using a stylus or knitting needle, trace along the lines of the design. After you are finished, lift the tracing paper and graphite paper and review your design. At this point, you can use a Sharpie marker to fill in any areas that you might have missed. Also, you can go over the graphite lines with a Sharpie marker so that the lines are easier to see while you paint. You will see the marker and graphite in your paint, however, after firing in the electric kiln, the marker and graphite burns out of the china paint.

China paint is usually a powder mixture packed into clear plastic or glass vials. Pour a small amount of powder onto a grinding glass or a ceramic tile. Use an eyedropper or scoop a small amount of mineral oil onto your pallet knife and drop onto the china paint powder. Use the pallet knife to mix the paint. Mix thoroughly. Mix the paint to resemble the consistency of toothpaste. If the paint is too runny, add more powder. You can also scoop up paint that has too much oil and place it on newsprint.The newsprint absorbs the extra oil in the paint. Continue mixing the paint on the newsprint until the newsprint absorbs the oil. After your paint is well blended with the mineral oil, use your pallet knife to scrape the paint off of the tile or glass and transfer the paint mixture to your pallet.